Much feeling and thought in the review, thanks David.  It's like reliving PG's earlier performance in Brisbane!
t

**warning - setlist spoilers and excessive verbiage below**
A cold night in Adelaide. I'm keeping a lid on it, though my partner has noticed I've been singing bits of VoN songs in the car all week - "Someone's excited about the gig" she says with a smile.
Standing at my local train station, letting the person in the shelter have the place to herself - a bit too much pacing, ostentatious smoking and lying on the cold bricks of the platform for my taste.
I jump in the train for the all of two stops journey to the iconic Governor Hindmarsh Hotel aka The Gov (I love where we live!)
Ticket taken at the door - place is already almost full..and I discover to my horror, that, as per other Powdies' reports of their experiences, that the floor is covered in chairs. WTF? I've been to many a gig at the Gov - never seen this before.
Most seats are taken (not that I would've sat down anyway). I get a good possie with a direct line of sight to middle of the stage down the aisle in the middle of said offending furniture. Abbe May is doing her thing - alone with a guitar, some prerecorded backing tracks. Not familiar with her work at all,  but she's doing a great job - not all phased by the fact that over half the crowd are taking the opportunity to talk over her.
Nor is she phased by the older gent who looks like a grey haired version of this chap, and dressed in Tom Baker-era Dr Who style. He is moving slowly, pumping his arms and, judging by the puffing of his cheeks, appearing to be finding this activity rather strenuous. 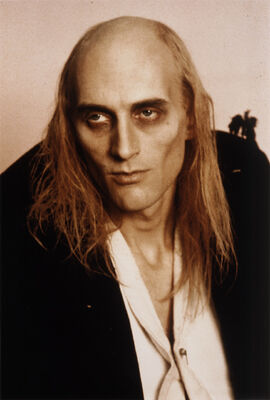